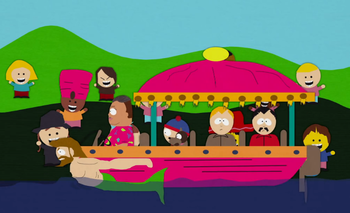 "Big Gay Al's Big Gay Boat Ride" is the fourth episode of the first season of the American animated television series South Park. It originally aired on September 3, 1997 on Comedy Central in the United States. The episode was written by series co-founders Trey Parker and Matt Stone, and directed by Parker.In this episode, Stan's dog, Sparky, is revealed to be gay after humping a rival male dog.Directed by: Trey Parker. Sep 03, 1997 · and welcome aboardthe big gay boat ride! on this adventure, we'll be seeingthe world of gayness. throughout time. and the south park cowsare set to receive, there's the kick. it's taken by number 23,kenny mccormick. he's at the 50,the 40, the 30 the little running backis down!